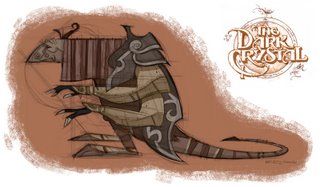 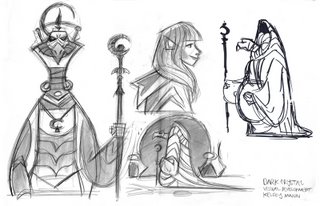 A while ago I got a chance to do some visual development for an animated version of "The Dark Crystal" for Cartoon Network. I had heard that they were developing it as a series and I got in touch with CN's development team to see if I could get involved. I don't want to post any of the work that I did for the project, but I think it's alright if I post the work I produced as a test to get the job. The actual development went in a different direction that this, but I really had fun with what came out in my first run.
Posted by Kmann at 11:34 PM

Beautiful work! and thank you for the nice comments on my blog!

These are great! I recognised them immediately! I could definitely watch an entire cartoon in this style.

These are AWESOME!! Great design!

great designs! i really like the pen sketch on the right.

Can't wait to see where that goes.

oh man this is fantasatic stuff!!!! will be back a load!!! Thanks for stoppin by my blog!

Nice job man! When is that coming out? Can't wait to see how it ended up looking.

Wow Kelsey, your work is amazing. Fairfield looks fantastic. Your lines are so nice. Beautiful work. Thanks for the comments too.

wicked drawings k man! my gym partner's a monkey looks like a great show! must have been a fun gig. cheers!

AWESOME man. What a great opportunity to work on one of the greatest fillms to grace the fantasy world . . . the animated version. Great designs Kels. We miss you buddy. But with great work like this I can understand, you must be busy creating. Awesome man.

These are fantastic!!!! Great stuff.

Really inspiring! I love the way you deal with geometrical shapes design! The logo is also great!

Man, that would have made my Saturday mornings complete as a 10 yr old....

What! No FIZZGIG sketch?!??

These images just stopped me cold in my tracks when I saw them. Great designs.

I still love watching this movie, and only have moderate hope for the sequel they are workig on. But the mere thought of seeing an animted version... god that would be so freakin incredible.

So is this project still a go? I certainly hope so.

Sorry, The Dark Crystal has left me with a permanent scar. These conceptual designs are awesome! Well, all of your work is great.

Chamberlain! I challenge!
Trial by stone!

Ah, who am I kidding? You'd whip my ass...I'll just drink Kira's essence instead. I hear it tastes like Red Bull. (Get it? They BOTH have wings! Hahahaha...okay, I'll exit now)

I LOOOOVE Dark Crystal!!! I LOVE your design approach here too, can't wait to see the actual stuff come out!

These are amazing! It would have been great if the show did go this direction.

Wow, Kelsey! Rad rad rad. It's great to get to see stuff like this. Thanks for posting it!