I got a chance to stop by and see Comic Con's little sister, Wondercon! It's a lot like Comic Con, only smaller. And I'd have to say a bit more claustrophobic. At least in at the San Diego Convention Center, I feel like there's some open areas to go catch your breath. I never really got that at Wondercon. There were people everywhere! Plus you couldn't escape outside since it was raining! But I still had a good time seeing old friends and checking out the "Clone Wars" panel with some new ones! Kudos to Dave and Catherine for doing a great job!

If I was feeling better, I would have done a sketch or two. So in lieu of that, here's a sketch I did at last year's Comic Con... 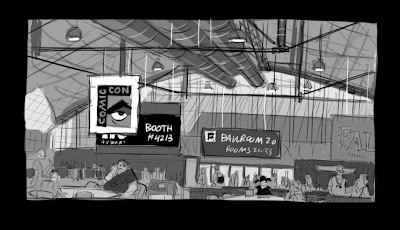 I've been gone for a while, but not without a good reason. I got a new kick ass job! I just accepted a postion at Lucasfilm Animation! I've been swamped with the move up to the Bay area and going thru training. Which I really can't complain about since I spent my first week getting trained in 3D at ILM! I took a job working in the 3D story department on the "Clone Wars" television series. Which ironicly has just been announced to air on Cartoon Network!

The coolest thing about this job (besides working on Star Wars of course) is that I get to drive onto Skywalker Ranch everyday!
The main house at the Ranch is nothing short of stunning. I just had lunch here with a fellow new employee, Ira Owens. We ate with George. Well, next to him.

It's really been a great experience so far and I'm really proud to be a part of the team here. I've got a lot to learn and even more to prove, which is why I've been away for a while. But now that I'm getting a bit more settled, it's time to start blogging again!
Posted by Kmann at 10:31 PM 16 comments: