It's easy to dismiss the work of Jim Henson as cute kid's fare. Stuff for 6 year olds. A lot of people overlook what Henson and his team did together. What they made together was nothing short of brilliant. Look at this scene from "The Muppet Movie". This is a song Gonzo sings after the gang's bus breaks down and it looks as though their plans to reach their goals have come to a dead end. Paul Williams' lyrics are elegant, poetic, and touching. Dave Golez gives a performance as Gonzo that is full of warmth and soul. It's an incredibly moving song that is easily overlooked. Not many films go beneath the surface and speak about something so deep and soulfull. I have no idea how this didn't win an Academy Award. 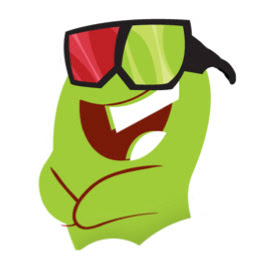 So an episode that I boarded is going to air this Friday. It's a Halloween episode and it's going to be in 3D! That's the good news. The bad news (especially if you're a kid) is that you have to make your own glasses to watch it! Check out the official site if you don't believe me. Luckily we've got glasses around the studio otherwise I'd have to make a trip to the craft store!

Check out the website for when it airs in your part of the world!
Posted by Kmann at 9:40 AM 9 comments: